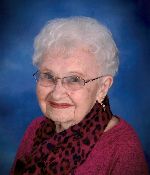 She was born in Silver Lake on August 23rd, 1922 the daughter of Joseph E. & Elizabeth (Rozeske) LaMott.

Zoa M. Loew and Leander F. “Lanny” Fasching were joined in holy marriage on September 7th, 1974. He preceded her in death in 2003.

She was formerly employed at Tonka Toys in Mound for ten years. Zoa later owned and operated The Klip and Kurl Beauty Salon for twenty-five years in Winsted.

Zoa was a faithful member of Holy Trinity Catholic Church in Winsted and belonged to The Saint Anne’s Society. She also was a member of American Legion Post # 407’s Auxiliary and V.F.W. Post # 9232 Auxiliary.

Zoa enjoyed volunteering at The Winsted Festival and Winstock. She was fond of card playing, crocheting, gardening and enjoyed being with family, her grandchildren and great grandchildren.

A Mass of Christian Burial for Zoa Fasching will be held on Monday, July 30th at 10:30 A.M. at Holy Trinity Catholic Church in Winsted. Father Tony Stubeda will be the Celebrant. Interment will follow at Holy Trinity Cemetery.