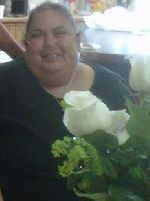 Yvette Wilma Burshiem-Kohl, age 56, journeyed to the Spirit World on Thursday, August 8, 2013 at The Sanford Hospital in Fargo, North Dakota.

She was born on October 4, 1956 in St. Paul, Minnesota the daughter of William Burshiem and Doris Heminger.

Yvette received her GED. Later, she received an AA degree at SWC and a Bachelor degree at Huron University.

She was formerly employed in the Accounting Department at The Dakota Sioux Casino until illness caused her to quit working. Prior to working at the casino, Yvette worked for the Sisseton-Wahpeton College in Agency Village in various capacities. She was always willing to help, counsel, assist and encourge students to further their education.

Yvette’s biggest joy was her grandchildren and great grandchildren. She loved to cook and always took care of everybody. One of her bedrooms served as her pantry, and was always willing to bring a dish to any family function, church function always willing to feed everyone. Never once asking for anything in return.

Yvette was instrumental in organizing fund raisers for all special occasions. She would always be worried about those in need.

Since she was a young girl, Yvette was always babysitting. She took in many children as her own. She was worked with foster children and many passed through her home. She special love for the last one, she adopted and took responsibility as her own.

Yvette was united in marriage to Gilbert Kohl and to this union 4 sons were born.

Her love and faith was touched by many and she will truly be missed by all.

All night wakes will be held on Saturday, August 10th beginning at 7:00 P.M. at The Ascension Presbyterian Church in rural Peever, South Dakota. On Sunday, August 11th beginning at 12 Noon moving from the Ascension Presbyterian Church going to The Sisseton-Wahpeton Oyate Community Center in Old Agency Village for an all night wake.

Honorary Casket Bearers will be all of Yvette’s relatives, her aunties, cousins and her many friends-especially her facebook buddies.