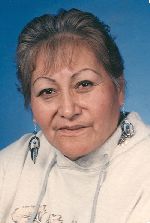 She was born on August 12, 1940 in Pine Ridge, South Dakota the daughter of Gayle & Theresa P. Weston Two Bulls.

Yvette was a former dispatcher and secretary to the Captain of The Tribal Police Department in Pine Ridge. She also formerly was employed as a secretary at The Inner-Mountain Indian School in Brigham City, Utah.

Preceded in death by a son: Anthony Wallace Little, her parents, a brother: Gayle Clarence Two Bulls and by a sister: Avis Jean Two Bulls.

An all night wake will be held at Billy Mills Hall on Sunday, August 19th beginning at 3:00 P.M.