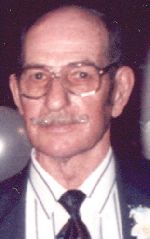 A Mass of Christian Burial for William Wemhoff was held at Holy Trinity Catholic Church in Winsted on Saturday, July 19th at 10:30 A.M. Father Eugene Brown was the Celebrant. Interment with military rites Holy Trinity Cemetery.

The organist was Alice Nowak. Theresa Wemhoff was the soloist and sang “Amazing Grace”.

At age 15 he hired out as a farmhand, followed the harvest fields in eastern Dakotas and western Minnesota which eventually led him to the Winsted area where he met his future wife, Anna Loebertmann. He then worked for a farmer near New Germany.

William served his Country in The United States Army during World War II from March 12, 1942 until he was honorably discharged on November 19, 1945. He was awarded on battle ribbon during the invasion on the Aleutian Islands.

On April 3, 1945, William John Wemhoff and Anna Theresia Loebertmann were joined in holy matrimony at Holy Trinity Catholic Church in Winsted by Father Mointzheim. God blessed their marriage of sixty two years with six children. He was a loving and devoted husband and father.

They lived in Platte Center, Nebraska approximately one year and moved to a home near Lake Ida in Wright County, Minnesota from 1947 to 1951. He was employed at Western Condensing for two years. They then moved to a forty acre farm south of Winsted and farmed until 1969. While farming he was employed at Millerbernd Manufacturing and retired after thirty two and a half years. During his retirement he was employed at Charlie Millerbernd’s for a short time. Bill and Anna resided the past forty years southwest of Winsted.

William was a very active member of American Legion Post #407 for sixty three years. He was chaplain for one year, signed up memberships from 1964 to 1967 and again for one year in 1978, and he read the roll call of fallen comrades for each Memorial Day Service from 1971 to 2006. He earned numerous certificates for continuous membership services. William was a faithful member of Holy Trinity Catholic Church in Winsted from 1938 to the present.

William was a hard working man from early youth to his passing. As a hobby he loved to recycle numerous items. He was able to do some traveling and one of his highlights was a trip to Hawaii. He enjoyed riding his tricycle to Winsted to do errands. He liked to read and liked to work in the garden and mow the lawn. He had a lot of interest in steam engines and would attend many steam shows. He shared many stories of his growing up with his siblings and anyone who would listen.

Blessed be his memory!