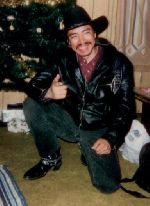 He was born on December 11, 1969 in Sisseton, South Dakota the son of William Blue Sr. & Sylvia Redday.

William had a variety of jobs which included working at The Magic Casino in Flandreau, South Dakota and The Lode Star Casino in Fort Thompson, South Dakota. He also worked odd jobs and enjoyed working on cars to pass the time.

He is greatly loved by his family and will always be in our hearts.

Preceded in death by his father: William Blue Sr.

All night wakes will be held on Friday, December 10th and Saturday, December 11th beginning at 7:00 P.M. at The Community Center in Old Agency Village, South Dakota.

Honorary Casket Bearers will be All of Sonny’s relatives and friends.