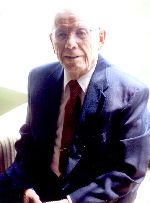 Mr. & Mrs. Strandquist engaged in dairy farming in Oster for many years. Willard was born on, raised, engaged in farming and lived his entire life on his family’s homestead in Hollywood Township, Carver County.

He was a lifelong, faithful member of The Oster Covenant Church.

Willard enjoyed fishing, especially ice fishing. He was also fond of playing horseshoes in both a league and in tournaments.

He was a longtime board member of McLeod County’s REA.

Pianist will Mary Bailey. Vocalists will be Kathleen Deidrick and Mary Jo Strandquist.

A visitation will be held on Wednesday, December 15th from 5-7 P.M. at The Chilson Funeral Home in Winsted.

Further visitation will be held on Thursday, December 16th one hour prior to services at the church.