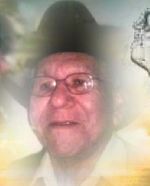 Whitney grew up in the Sisseton and Fort Thompson, South Dakota area. He graduated from Stephan Immaculate.
On August 31, 1950, Whitney Allen Rencountre & Thelma Rachel Black Tongue were joined in marriage in Chamberlain, South Dakota. Whitney’s first job was at The St. Charles Hotel in Pierre, South Dakota at the age of thirteen. He was also a Heavy Equipment Operator, Police Officer, Semi Driver, CCST Council Member, Brick Layer, started a grocery store at Old Wicks Place, he was also in the junking business all of his life. He and his son Allen started their own trade called Allen’s Auto Salvage where he worked till the end days. He belonged to Hunkpati Oyate Singers with Dan & Chapelle Fire Cloud, Mike Bagola, Jimmy Blue, Whitney II & Virgil Williams would help sing and the organizations he was involved in were Louis C. Fogg Jr. Legion, American Legion, Crow Creek Historical Society. His special interests were family, living a traditional way of life, his eyes would twinkle and his face would light up with a huge smile when he watched his grandchildren and great grandchildren sing and dance at Powwows. He loved to sing with his Drum Group called “Hunkpati Oyate” and danced Grassdance and traditional. He grew up on The Sisseton Reservation from around 3-6 years and his special childhood friend was Hepana Canku. He was enrolled at Sisseton then later at Crow Creek Sioux Tribe.
He entered the United States Army with his KODA cousin Flip Fogg and was in the Korean War and was a Sergeant when he was discharged. His special buddy ther was Robert Sowzer from New York. He taught his grandsons and Malerine Fisher’s sons to sing Dakota. Whitney built his own home for his family in the 1970’s. He hunted and fished for his children all of his life.