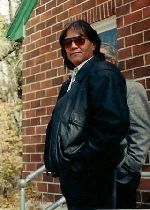 Wally was born on May 21, 1952 in Redwood Falls, Minnesota the son of Wallace and Iola (Goodthunder) Pendleton Sr.

He enjoyed many things in life, like playing cribbage, Keno, and poker. Always liked to party and enjoyed hosting to his many friends and family.

Preceded in death by a grandson: Don Wallace Hernandez; his parents, his brother Mathew Pendleton, a sister Gloria Pendleton and with loving sister Beatrice Rainey.

Funeral Services for Wallace Pendleton Jr. will be held on Monday, October 4th at 4:00 P.M. at The Lower Sioux Community Center.

All night wakes were held on Saturday, October 2nd and Sunday, October 3rd at The Lower Sioux Community Center.

The Chilson Funeral Home in Winsted, Minnesota is serving the family. Online condolences may be made to
www.chilsonfuneralhome.com