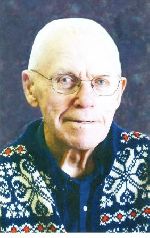 Wallace Alden Strandquist, 97, of Oster (rural Waverly), went home to be with his Lord and Savior, Jesus Christ on April 23, 2013 at the Elim Home in Watertown. .

Wallace was born on February 18, 1916 in Oster (Woodland Township), son of David and Esther Strandquist. He graduated in 1934 from Minnehaha Academy in Minneapolis and completed one year of business school. On November 31, 1941, Wallace was united in marriage to Audrey Sutherland in Edina, MN. They were married for 57 years and farmed in the Oster community. Wallace was a faithful member of the Oster Covenant Church, having served as trustee and treasurer.