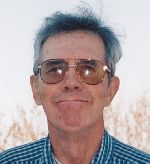 Virgil Albert Zeidler, age 74, of Howard Lake, passed away Tuesday, December 21, 2010 at Ridgeview Medical Center in Waconia, Minnesota.
Virgil was born on June 14, 1936 to Arthur and Ada (Uecker) Zeidler. He was baptized at St. James Lutheran Church in Howard Lake, Minnesota. He went into military service in the U.S. Army from 1955 to 1957. Virgil was united in marriage to Marie (Hausladen) at Holy Trinity Church in Winsted, Minnesota, on September 7, 1957. This union was blessed with seven children. Virgil worked for Goebel Fixture Company in Hutchinson, Minnesota for thirteen years, before taking over the family dairy farm in 1966. He enjoyed woodworking, fishing, playing cards, family parties, and working on the farm.
Virgil is survived by his wife, Marie of Howard Lake; children Diane (Randy) Mielke of Lester Prairie, Debbie (Doug) Bettcher of Mayer, Sandy (Dale) Exsted of Glencoe, Patricia Larsen of Bloomington, Scott (Kim) Zeidler of Annandale, Brad (Denise) Zeidler of Blaine, and Chris (Amanda) Zeidler of Cokato. He is also survived by seventeen grandchildren, and four great-grandchildren. He is further survived by a sister Jeanette (Harold) Schuettpelz of Watertown; and a host of nieces, nephews, and other relatives & friends. Virgil was preceded in death by his parents, Art and Ada Zeidler.
The Memorial Service will take place on Tuesday, December 28, 2010, at 11:00 a.m. at Holy Trinity Church in Winsted, Minnesota. Father Tony Hesse will officiate. A visitation will take place one hour prior to the service at the church.
The family was served by the Chilson Funeral Home in Winsted, Minnesota. Online condolences may be made to www.chilsonfuneralhome.com