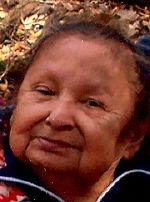 She was born in Sisseton, South Dakota on December 20, 1942 the daughter of Esther (Goodbird) and Peter Lafromboise.

She grew up in Sisseton and lived near Lake Traverse. She was a member of the Sisseton Wahpeton Sioux Tribe (Lake Traverse District).

On August 7, 1962, she married Leonard L. Lureen in Wheaton, Minnesota. The couple moved to Fergus Falls and made their home.

Jean & Leonard had property in Maplewood Township where she enjoyed spending her summer days with friends and family.

She also was fond of sewing, cooking, and watching her “Soaps”. She especially enjoyed all the grandkids and little ones that came to visit her.

Jean was preceded in death by her parents, a son: Elmer, grandson: Christopher, daughter-in-law: Tina, her brothers: Jonah and Morris Lafromboise and by a sister: Cora Lafromboise.

Funeral services for Violet “Jean” Lureen will be held on Monday, April 13th at 10:30 A. M. at The Community Center in Old Agency Village, South Dakota. Father Norm Volk, OMI will officiate.

Special Music will be by Billy Kohl and Butch Felix.

A graveside service will be held on Monday, April 13th at 4:00 P.M. at St. Otto Cemetery in Fergus Falls, Minnesota.