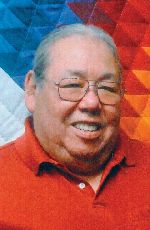 Vine attended Rosebud Boarding School in Mission, South Dakota and graduated from High School at Flandreau Indian School. After High school he attended Bacone Junior College in Muskogee, Oklahoma and graduated from South Dakota State University in Brookings with a Bachelor of Science Degree in History and a minor in Indian Studies. He also went on to attain a Master’s Degree at SDSU in Guidance and Counseling and worked as a counselor for juniors and seniors at The Flandreau Indian School.

Vine spent four years in the United States Air Force and received an honorable discharge. After the military he worked for the Western Electric Company in Sioux Falls for seven and a half years.

On August 17, 1968, Vine Myron Drapeau and Eloise Nadine Allen were joined in marriage.

Vine was employed for twenty one years as a counselor/teacher at the Flandreau Indian School. Helping young Native American students get their lives headed in the right direction was most rewarding to Vine.

He had lived in Flandreau, South Dakota for over thirty one years. He followed the Traditional Dakota way of life and has Sun Danced for the people. He worked for the Santee Indian Community for the Johnson O’Malley Program and on the Powwow Committee and tried to be of help to the Native American Community.

Preceded in death by his daughter Marie Drapeau, his mother Mae Redhawk, father Joe Drapeau and by a brother Patrick Drapeau.

Funeral services for Vine Drapeau will be held on Monday, September 19th at 10:00 A.M. at the Eastman Hall in Flandreau, South Dakota. Pastor Dave Knudson will officiate. Traditional Spiritual Leader will be Richard Thomas and Ron Thomas.

Honorary Casket Bearers will be All Veterans and Youth.