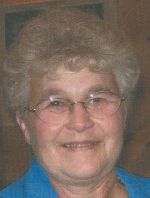 She was born on May 12, 1938 in Hale Township, McLeod County the daughter of Peter & Martha Pawlak Pawlicki.

Veronica graduated from Silver Lake High School in 1956 and was Co-Valedictorian.

On October 26, 1957, Veronica A. Pawlicki and Robert J. Schurmann were joined in holy marriage at St. Adalbert’s Catholic Church in Silver Lake. God blessed their marriage with seven children.

Veronica and Bob engaged in dairy farming north west of New Germany after their marriage until 1990. They continued to do cash crop farming.

Veronica was a loving & caring person. She was also a devoted wife, mother, grandmother and great grandmother. She enjoyed music, fishing and traveling with her husband.

She was a faithful member of Holy Trinity Catholic Church in Winsted, C.C.W. and belonged to The St. Anne’s Society & Holy Family Society.

A Mass of Christian Burial for Veronica Schurmann was held on Wednesday, September 30th at 10:30 A.M. at Holy Trinity Catholic Church in Winsted. Father Tony Hesse was the Celebrant. Interment followed at Holy Trinity Cemetery.

Alice Nowak was the organist and special music by chuck Thiel.

A visitation was held on Tuesday, September 29th from 4-8 P.M. at The Chilson Funeral Home in Winsted. A St. Anne’s Society Rosary was recited at 4:30 P.M. and a Parish Prayer Service at 7:00 P.M.

Further visitation was held on Wednesday, September 30th from 9-10 A.M. at the funeral home.