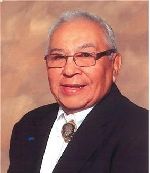 Vernon was born February 3, 1932 in Red Lake, Minnesota the son of William and Stella (Webster) Clark.

He served in the U.S. Army from 1950-1953. He did his Basic Training in Fort Riley, Kansas, receiving his G.E.D. while in the Army. He then went to vocational school in Milwaukee, came home and worked for Red Lake Housing, and then worked for Red Lake IHS for over 20 years until his time of retirement.

Vernon took great pride in his lifelong accomplishments as he was an extraordinary man with a very strong work ethic, a successful reputation with admiral qualities of honor, respect, and trust. Active in his community as well, he served as a boxing coach and judge for many years, currently active on the boxing commission, and Homeless Shelter Board of Commission. Vernon also served on the Red Lake Housing Board of Commission from 9-1-1998 thru 9-30-2006, and Paul Bunyan Telephone Company Board of Commission, recently retiring after 13 years. His greatest personal accomplishment was being able to help raise money to have the St. Antipas Episcopal Church built in Redby.

He loved working, traveling, gambling, playing Bingo and gardening. He enjoyed hunting with his best friend Jocko and taking daily rides with his wife, which usually led them to one of the surrounding casinos. He was an avid Red Lake Warriors fan never missing a game. His most favorite past-time was spending time with his grandchildren whom he loved with all his heart.

Funeral Services for Vernon Clark Sr. will be held on Friday, February 14, 2014 at 1:00 P.M. at the Community Center in Redby, Minnesota. Father George Ross will officiate.

A wake will be held on Wednesday, February 12th beginning at 4:00 P.M. at the Redby Community Center and will continue until the time of service.