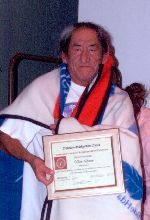 He was born to Lena (Max) Driver and Moses H. Driver on December 10, 1943 in Sisseton, South Dakota.

Vernie worked for The Community Health Representative Program for the past nineteen years. He was employed until December 2009. Prior to his work with the CHR Program, Vernie held various positions within the Tribe.

Vernie was a well-known artist and had his artwork displayed locally and throughout the surrounding area.

Vernie grew up in the Long Hollow District Community. He attended elementary school at the Day School as well as Tekakwitha and Wahpeton Indian School. He attended Haskell Indian Jr. College in Lawrence, Kansas where he took art classes and also received his G.E.D.

His passion was his artwork. He loved being with his children, traveling and listening to music.

Preceded in death by his parents, two sisters: Caroline and Doris Driver and one infant daughter: Priscilla Driver.

Funeral services for Vernie Driver will be held on Saturday, April 17th at 2:00 P.M. at Long Hollow District Center.

Interment will follow at the family home site where Vernie grew up.

Drum Group will be “Cook Brothers”.

An all night wake service was held on Thursday, April 15th and Friday, April 16th at Long Hollow District Center.

Honorary Pallbearers will be all of Vernie’s friends and relatives.

The Chilson Funeral Home in Winsted, Minnesota is serving the familiy. Online condolences may be made to www.chilsonfuneralhome.com