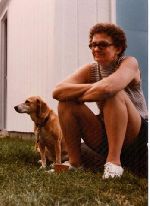 She was born on February 18, 1927 in Hardin County, Iowa the daughter of Loring Klaffke and Elise Ratze.

Velma was formerly employed as a baker at Red Lobster.

She loved to garden, crochet, spend time with family, drink coffee and puzzles. Velma was a breast cancer survivor of twenty six years. She worked for thirty years at Red Lobster. Velma also liked her dog “Pumkin” and her cat “Snoopy”. She was a Minnesota Twins and Minnesota Vikings fan.

Survived by her son: Michael Bolles; a daughter: Patricia Arrell; two grandchildren and five great grandchildren; other relatives and friends.
Funeral service for Velma Bolles will be held on Monday, May 12th at 1:30 P.M. at Park Assembly Church, 1615 Texas Avenue S., St. Louis Park, Minnesota.
Interment Hillside Cemetery in Minneapolis on Monday, May 12th at 2:30 P.M..
Honorary Casket Bearers will be all her friends and family.