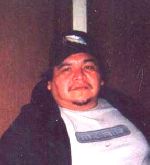 Varden was born the son of Joyce Hopkins and Tony Ross on February 12th, 1958 in Sisseton, South Dakota.

On October 7th, 1994, Varden was married to Esther “Molly” LaFromboise in Sisseton.
Varden enjoyed playing sports while in high school, playing football he was quarter back, and he loved to wrestle as well. Varden graduated from Marsh Valley High School in 1977. Varden’s hobbies that filled his time were working on model cars, playing card games and pool, fishing, watching NASCAR, and supporting his favorite team, the Washington Redskins, and listening to country music. He worked in Idaho for the railroad in the late 70’s and then moved back to Sisseton having several different jobs. Varden will fill our hearts with memories of being loving, outgoing and humorous.

The Chilson Funeral Home is proud to have served the family…