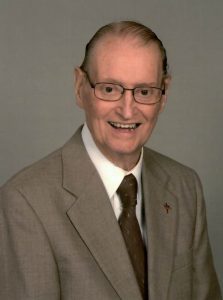 Val was born on September 19, 1938 in Waverly to Valtimere & Genevieve (Karels) LePage.   He grew up in Waverly and lived his entire life there.

Val attended St. Mary’s School and graduated in 1957 which was the last class to graduate from the old school.   He was a lifetime member of St. Mary’s Catholic Church in Waverly where he served as an usher.

Val and his brothers carried on LePage Excavating Transfer until it was sold.  Val was formerly employed at Washington Scientific for over 30 years.   Following his retirement, he worked 11 years for the Winsted Herald Journal.  He was a member of the Waverly Volunteer Fire Department for 29 years and Fire Chief for 8 years.

On June 25, 1960, Val and JoAnn Scheiber were united in marriage.   They enjoyed 60 years of marriage and were blessed with five children Patti, Mary Jo, Tim, Michele and Lisa.

Val enjoyed T.V., playing in the 500 card club group with classmates and friends.  He also enjoyed the Minnesota Vikings, Twins, fishing trips up north, lottery scratch offs, and playing with his grandchildren and great grandchildren.

Preceded in death by his parents, siblings Alan, Ron and Linda and by brothers- in- law Paul, Syl and Dennis.

A Mass of Christian Burial for “Val” “Pooch” LePage will be held on Friday, March 5, 2021 at 10:30 A.M. at St. Mary’s Catholic Church in Waverly.  Father Kenneth O’Hotto will be the Celebrant.   Interment will follow at St. Mary’s Cemetery.  A Celebration of life will be held at a later date.

Go in Peace Dad, your parents, brothers and sister are waiting for you!