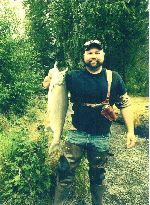 FURTHER VISITATION WILL BE HELD AT THE CHURCH ON MONDAY MORNING ONE HOUR PRIOR TO MASS.

Tyler Kevin Kloos, the son of Kevin and Shelly Kloos, was born on September 12, 1987, in Winsted, Minnesota. He grew up in Winsted, Minnesota and graduated from Lester Prairie Public School in 2006 and participated in football and wrestling. He continued his education by attending Ridgewater College in Hutchinson, Minnesota. After earning a degree in Non-Destructive Testing, Tyler’s career allowed him the opportunity to live and work in many states while working for TEAM Industrial Services.

He fulfilled his dream of moving to Alaska in 2014. As an avid outdoorsman, he loved to hunt and fish. He expanded his passion for the outdoors while living in Alaska hunting the Alaskan Moose, casting for Kenai Reds, trolling for King Salmon, and snowmobiling. Though he loved to adventure, hunt, and fish in all new places, nothing could quite beat his love and passion for hunting trophy whitetails in Minnesota. Tyler would not turn down the chance to have a good time with a friend or family member. Late nights, loud laughs, and big hugs were something you could always expect if you were spending time with him. Everyone will always remember him for his positive outlook on life, the way he could cheer up a room, and most of all, his unmistakable laugh and smile.

Tyler passed away on Saturday, January 28 2017, at Lost Lake in Cooper Landing, Alaska. While snowmobiling in his favorite place, he was caught in an avalanche.

In the following weeks, Tyler’s family plans to travel back to Soldotna, Alaska for a memorial service with his friends and coworkers from that area that were blessed to know and love him as well.

As the eldest child of Kevin and Shelly (Plotz) Kloos, Tyler leaves behind his brother Lucas (Justine) Kloos and their two daughters Brielle and McKenna, and his sister Samantha Kloos.