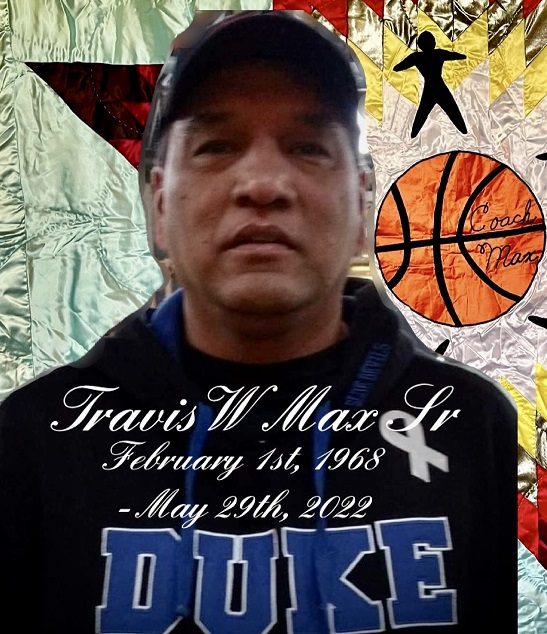 Travis Wayne Max Sr., Wambdi hdeska oyate kicidowan (He sings for the spotted eagle nation) was born on February 1st, 1968 in Sisseton South Dakota to Virginia & Vincent Max Sr. Travis started his journey to the spirit world on Sunday May 29th, 2022 at his home.

He grew up in the Sisseton area and was involved in sports at a young age. Playing as a member of the Max’s Minimart basketball team. He then started his high school career at Flandreau Indian School where he met and married his wife Crystal Has the Eagle, of this union Travis and Crystal had 4 sons. Travis Max Jr, Joel Max, Cullen Max and Inyanha Max.

In 1987 moved home from Flandreau to finish his High school career. Travis was one of the first high school graduates of Tiospa Zina Tribal School. He became an officer for the SWO Law enforcement and later on he became a basketball coach and a Dakota song teacher at Tiospa Zina. He coached many students as a middle school basketball coach before he started his career as a High school basketball coach for both the boys and girls team. After his years of service at TZ, He then worked for the Sisseton Wahpeton Tribe as an interstate case worker for the Child support department.

In the early 1990’s he was the drum keeper for the Wambdihdeska wiwang waci where he faithfully attended every meeting and ceremony.

He was a singer and one of the original members of the Ridge Runners back in the late 1980’s after singing with them he started singing with the Dakota Nation drum group for many many years singing across the nation. Travis was a champion of everything he did. He followed his dads and relatives footsteps when it came to playing Hanpa apena (moccasin game). His love of hanpa apena won him a lot of tournaments.

Travis enjoyed spending time with his family and friends. He was an avid sportsman with a love, not only for singing and hanpa apena but also for golfing, bowling, football and basketball.

Travis will be dearly missed by his tiwahe and all who loved him.

Burial will be on Saturday June 4th at 12:00 pm at the Wambdihdeska wicahapi (Spotted Eagle Cemetery) in Buffalo Lake, SD. Travis will be laid to rest by his son and parents.