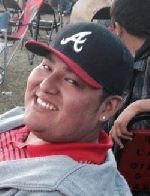 Travis Wayne Max Jr. 10/08/1986 was born in Sisseton, South Dakota to Travis Wayne Max Sr. and Crystal Has The Eagle. He grew up on the Sisseton Wahpeton Oyate Reservation, where he attended local schools. Tiospa Zina Tribal School, Flandreau Indian School and Sisseton High School, he graduated from Tiospa Zina Class of 2005.

Known as TJ by many, he was talkative, happy going, and loved to laugh. He always greeted people respectfully, giving hugs and was not afraid to introduce himself.. TJ was a very respectable, caring, humble and loving individual, he was always smiling and made new friends everywhere he went. he was never judgmental and he loved his children dearly.

TJ was very active in numerous sports and became more dedicated during middle school and high school where he passionately participated in Basketball, Golf and Track. He started playing golf in middle school and by the 5th grade, he became the first Tiospa Zina golfer to reach the South Dakota State Tournament and accomplished reaching State, three more times throughout his his high school athletic career. TJ stated playing basketball in middle school throughout his high school career he was part of the qualifying team in 2003, and 2004 – 2005 the first Tiospa Zina team to win Districts and make it to the Regionals, falling one game short of making it to qualify for State. TJ continued to play sports after high school and went on to accomplish, hitting a hole in one for golf and striking his way through a 500 game in Bowling. TJ also went full circle and gave back to the community as an assistant coach as well as a TZTS Head Basketball Coach, mentoring and coaching both, Middle School and High School boys from 2016 – 2018, he truly loved coaching and valued his relationship with the young men he mentored.

TJ was a champion moccasins player. He also enjoyed traveling, he went from California to New Mexico and Canada for golf tournaments and Moccasin games. TJ started singing at a young age, he loved to sing, as he got older he started singing with different well known drum groups, to name a few groups: Bad Nation, Dakota Hotain, Dakota Nation, Wahpeton, Iron Boy, Rock Hill and Haystack. He was part of many championship singing contest and he also sang for Wiwanke Wachipi at Sun Dance. Like many things he began playing Hampa Apena at a young age, a traditional game, Moccasin game. He loved to sing songs that went with the games. You don’t win them all they say.

He loved listening to all types of music. He worked for Dakota Magic Casino in I.T. then Dakota Connection Casino as a Slot Tech and he later worked for the Sisseton Wahpeton Oyate for the M.I.S. Department as a Computer Tech.

We all love him dearly and he will be missed very much!