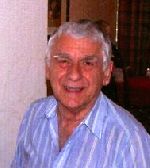 Thomas Howard Krekelberg of Long Beach, California, born August 3, 1929, St. Paul, Minnesota, passed away peacefully at Bixby Knolls Retirement Residence and Health Care Center on March 13, 2014. In Minnesota, Thomas was related to the Frank and Mary Krekelberg and the Arthur and Alma (Krekelberg) Thompson Families, and by marriage, to the Louis and Kathryne Koesling Family. Former wife, Mona Lou (Koesling) Krekelberg preceded him in death, September 23, 2011. Thomas attended Dent Grammar School, Perham High School (Class of ’47), and attended College at St. Thomas, Mankato State, and The University of Minnesota. From 1951 through 1955, he was a member of the United States Air Force and served as an air traffic controller; later he put that training to work as a controller in the tower at Denver International Airport. Tom was fascinated with all things scientific, especially aeronautic and environmental; he was also devoted to the protection and care of animals, giving four years of his life to the grooming, training, and racing of harness horses. Tom’s final career was with the U.S. Postal Service, as a carrier, for over 30 years. Tom’s family members mourn his loss, but carry many precious and treasured memories of him. He was a loyal friend to many and had a generous heart for all those in need, especially any all Veterans. Bixby Knolls Towers was his home these past 11 years, and he was deeply appreciative of the community and care they provided there.
Funeral Services and burial will take place at Holy Trinity Catholic Church and Cemetery, Winsted Minnesota, with viewing at Chilson Funeral Home at 10:00 AM, followed by a Mass celebrated in the Church at 11:00 AM, by his nephews, Frs. William and Richard Krekelberg of California.