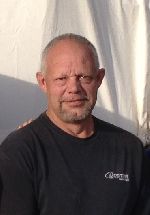 Thomas Edward Schlafer, age 62, of Winsted, MN, passed away at his home October 8, 2019. Tom was born in Minneapolis and was the fourth child of Harwood and Audrey (Lindstrom) Schlafer. Just three minutes later, his lifetime best friend and other half, his twin brother Gerry, was born. Tom was nicknamed “Doc” due to his job as a paramedic and he later retired from Lester Buildings in Lester Prairie, MN. Tom/Doc was a fanatical Vikings fan; game days were sacred. He was also a dog lover and fostered 37 dogs for No Dog Left Behind and several dogs for Midwest Animal Rescue Services (MARS). He was the life of the party and always had a joke, or two, to tell.
He is survived by his children Justin (Amy) Schlafer of Alta, Iowa and Lexi Schlafer of West Des Moines, Iowa; grandsons, Alex and Dane Schlafer; siblings Vicki (Bob) Heavirland of North Branch, MN, Paul (Dianne) Schlafer of Hendersonville, TN, James (Diana) Schlafer of Minneapolis, MN, and Carol Jackson (Ron Liebelt) of Deephaven, MN along with numerous nieces, nephews, friends, and dog friends.
He was preceded in death by parents, Harwood and Audrey; and his other half, twin brother, Gerald “Gerry”.
A celebration of life will be held at a later date. Memorials can be made to No Dog Left Behind or your favorite dog rescue charity.
Chilson Funeral Home, Winsted, MN served the family.