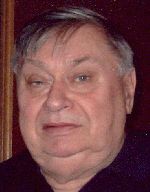 He was born on May 24, 1934 in Silver Lake the son of Edmund & Gladys Eggert Mickolichek.

He belonged to Holy Trinity Catholic Church in Winsted and was a member of Knights of Columbus Council #8253.

Tom engaged in farming for many years. He was formerly employed at The Green Giant Plant in Winsted and at Millerbernds.

He also owned and operated Tom’s Corner Bar in Winsted for twenty four years and one month.

A Mass of Christian Burial for Thomas “Tom” Mickolichek was held on Monday, September 29th at 10:30 A.M. at Holy Trinity Catholic Church in Winsted. Father William A. Sprigler was the Celebrant. Interment followed at Holy Trinity Cemetery.

A visitation was held on Sunday, September 28th from 3-8 P.M. at The Chilson Funeral Home in Winsted. A Parish Prayer service was held at 6:00 P.M. and a Knights of Columbus Rosary was recited at 7:00 P.M.