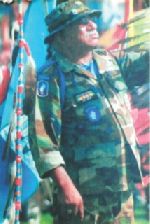 He was born on February 10, 1948 in Sisseton, South Dakota the son of Jacob DeMarrias Sr. and Mercy King.

In 1990, he was a member of the First Repatriation Team. First group to bring back Native American bones from the Smithsonian Institute and reburying them on Native land. He was one of ten members of the honor guard for this.

“Lincoln” was a Past Commander and member for over twenty five years. Was an active member of The Sisseton Wahpeton Oyate andVietnam Veterans Kit-Fox Society.

He was also a Sundancer and enjoyed going to PowWows. “Lincoln” also enjoyed Sunday dice games.

All night wakes will be held on Wednesday, April 25th and Thursday, April 26th beginning at 7:00 P.M. at The Community Center in Old Agency Village, South Dakota.