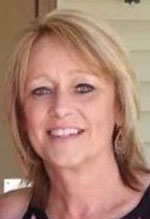 Sue Forsman, age 52, of Howard Lake passed away on Friday, August 24th, 2018 at her residence. She was diagnosed with cancer in March of 2017.
She was born July 14, 1966 in Austin, Minnesota the daughter of Frank A. and Bonnie (Rosenthal) Karnes.

Sue was a very caring Mom! She was always willing to help others. She enjoyed going to the casino, playing bingo, camping and the outdoors.
Sue was formerly employed at Littfin’s and was also a bartender at Keg’s Bar.

A Memorial Mass of Christian Burial for Sue Forsman will be held on Friday, August 31st, 2018 at 11:00 A.M. at Holy Trinity Catholic Church in Winsted. Father Tony Stubeda will be the Celebrant. Urn Bearer will be her son Nathan Helland.

Arrangements for Sue Forsman are by The Chilson Funeral Home in Winsted.