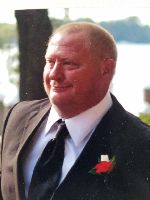 On April 8, 1989, Steven W. Rohling and Karry A. Rohling were joined in holy marriage at Holy Trinity Catholic Church in Winsted. God blessed their marriage with three children.

Steve engaged in dairy farming in rural Howard Lake, Wright County for many years. He also was formerly employed at Green Giant and hauled milk for Loren Yurek.

He currently was the President of the Winsted Coop Board.

Steve loved his grandchildren! He also loved farming and dairy cattle. He did custom butchering which he took over from his two uncles Leonard and Alfred Kieser. Steve always lent a helping hand to everyone!

Preceded in death by his parents William and Martha Rohling and by a sister Carol Rohling.

A Memorial Service for Steven Rohling will be held on Thursday, September 7, 2017 at 2:00 P.M. at Holy Trinity Catholic Church. Father Paul Schumacher will be the Celebrant. Alice Nowak will be the organist for the service and Stacy Konerza the vocalist. Entombment will follow at the Holy Trinity Niche.

A Time of Gathering will be held on Thursday, September 7th from 12 Noon until time of services AT THE CHURCH.