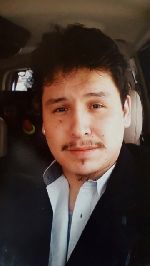 Steven John Sharpfish, age 30, of Sisseton, SD journeyed to the Spirit World on Saturday, May 6, 2017 in Sisseton, SD.

He was born on January 27, 1987 in Sisseton the son of Tracey “Rolly” Harwood and JoAnn Sharpfish.

Steven was a member of the Sisseton Wahpeton Oyate and was formerly employed at Dakota Magic Casino in Hankinson, ND as a Slot Technician/Dual Rate Supervisor. Growing up, Steven attended
Tiospa Zina Tribal School, New Effington Elementary and Sisseton Public School where he graduated in May 2005. He then moved on to the Sisseton Wahpeton College to obtain his general credits. He participated and enjoyed being involved in sports all throughout his school years but football was his favorite whether he was playing, watching or coaching. His favorite NFL team was the Buccaneers.
Steven also enjoyed fishing, hunting, playing moccasin, being with and around his uncles and family. He enjoyed every moment he could spend with his close friends/brother because it was in those days he was completely himself. He also enjoyed playing Xbox, traveling or taking road trips to see new movies, eat or to just simply get away and have fun. He and his brothers/friends were always laughing together, making dumb jokes, making fun of each other and basically living life together. Steven was a good listener as much as he was a good talker. He had a kind, gentle soul that touched so many hearts everywhere he went. He would always put his problems or anything aside just to make sure you were ok. Steven was the nicest person you could ever meet. He was like a teddy bear. He was his mom and his sister’s protector. No matter what it was, he would always be right there. Steven was one of a kind person; let his memories live on….

All-night wakes were held Wednesday, May 10 and Thursday, May 11, 2017 beginning at 7:30 each evening at the Sisseton Wahpeton Tribal Community Center in Agency Village.

Funeral Service was held Friday, May 12, 2017 at 11:00 AM at the Sisseton Wahpeton Tribal Community Center in Agency Village. Clyde Kampeska and Darrell Mireau officiated. Drum Group was Ridge Runners.