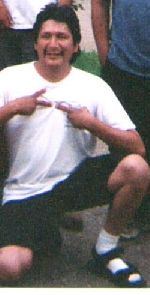 He was born on October 28, 1970 in Wessington Springs, South Dakota the son of Everett Jones Sr. and Augusta Snow.

Stephen enjoyed being very active. He was a fancy dancer in his younger years. He also ran track and played basketball. Stephen loved being outdoors and was an avid fisherman. He was a happy person who loved to laugh.

An all night wake will be held on Tuesday, November 19, and Wednesday, November 20, beginning at 7:00 P.M at the Crow Creek Sioux Tribal Hall in Fort Thompson, South Dakota.

Funeral Services for Stephen Jones will be held on Thursday, November 21, 2013 at the Crow Creek Sioux Tribal Hall at 2:00 P.M.

Honorary Casket Bearers will be all family members and friends.

The Chilson Funeral Home assisted the family with arrangements.