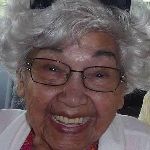 Jenkins, Sophie M., nee Morgan, age 93, of Minneapolis and the Leech Lake and White Earth Nations, passed away on January 14, 2018, surrounded by family. Her caring nature was exemplified in every aspect of her life, from helping raise her siblings after their mother’s untimely death to her work as a former nurse’s aide at St. Barnabas Hospital and the countless hours spent nurturing her grandchildren.

A fierce advocate for the marginalized, she was a foster parent to dozens of children and a witness to God’s love for the homeless, drug-addicted, and gang-affiliated across the Twin Cities.