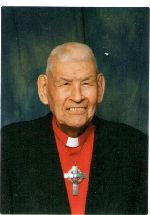 He was born on December 19, 1918 in Porcupine, SD the son of Joseph Byrd and Bessie Weston. Sidney was baptized by his grandfather, Rev. Samuel R. Weston on the date of his birth. He was raised by his grandparents.

Sid was stationed in the South Pacific Theatre during WWII while in the US Army. Upon returning to the States, he attended Bible School in Phoenix, AZ for four years. He then attended the University of Dubuque Theological Seminary and later graduated from Huron College. He was ordained a Presbyterian Minister at the Presbyterian Church in Porcupine, SD. He was a Tribal Elder for the Flandreau Santee Sioux Tribe and was one of the few remaining persons that could read, write and speak his Native Lakota Language.
His voice was used as “Grandfather” at Falls Park during Sioux Falls’ Laser Show.
He was Native by birth and Christian by choice.

He married Carolyn “Sue” Poleeson on June 7, 1952 in Phoenix, AZ. They were blessed with two children.

He was preceded in death by his wife in 1994; his parents; grandparents: Samuel K. Weston and Martha Redwing Weston; brothers: Harry Byrd and Guy Byrd; sister: Velva Stoldt; and half-sisters: Rachel Janis and Evelyn Galvan.

An all-night wake was held on Tuesday, December 6th beginning at 7:00 P.M. at the Community Center.