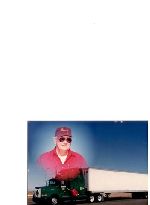 He was born August 18, 1931 in Otsego, Minnesota to Andrew P. Merges and Lucille Barthel Merges. Frank attended school in Albertville, Minnesota and served his country during the Korean Conflict in the U.S. Air Force. He married Mary Martz in Waco, Texas on September 5, 1953 They moved to Albertville, Minnesota and had twelve children. Frank farmed until 1974 when they moved to Winsted. Frank drove a truck until 1991 when he retired and then drove part-time until 2002. He loved truck driving, Springer Spaniels, jigsaw puzzles, tractors and farming.

Frank was preceded in death by sons: Duane Merges and Andrew Merges.

A memorial service will be held for Shirley Frank Merges on Friday, July 22, 2011 at the Chilson Funeral Home in Winsted Minnesota from 4pm until 8pm. American Legion Rites will be held at 6:45 PM, parish prayers will be at 7 PM and Honor Guard follow parish prayers.