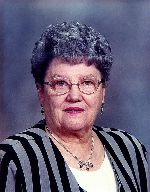 She was born in Silver Lake, MN on August 31, 1933 the daughter of Peter and Cecila (Podlaski) Smykalski.

Shirley was a member of the Winsted Legion Auxilary, Holy Trinity CCW and Ladies Aide. She loved flower gardening and feeding the birds, especially her cardinals. She was a very social person who loved to travel and enjoyed going to the casinos and playing bingo. Shirley was also a member of the Red Wing Pottery Association.

On June 23, 1951 Alfred Sterner and Shirley Smykalski were joined in holy marriage at St. Adalberts in Silver Lake. God blessed their marriage with eight children.

Mass of Christian Burial for Shirley Sterner will be 10:00 A.M on Monday, March 5, 2012 at Holy Trinity Catholic Church. Father Tony Hesse will be the celebrant.

The Chilson Funeral Home of Winsted assisted the family with arrangements.