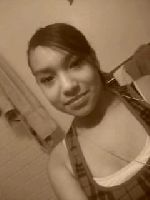 Shelby was born on February 1, 1998 in Sisseton, SD to Esther “Molly” (LaFromboise) and Varden Hopkins, Sr. She lived and was raised in the Peever Flats area, attended school at the Enemy Swim Day School and Tiospa Zina Tribal School. She was known as “Chub” or “Chubby” by her family and friends. Shelby loved to hang out with her family and friends and loved to make them laugh. She was always there for them when they were feeling down. She was a Washington Redskins fan and showed her love to all she knew. She will be sadly missed by everyone who knew her and she filled her family’s hearts with memories of being loved. She was outgoing and very funny and was a fan of Justin Bieber and enjoyed listening to his music.

Funeral Services for Shelby Hopkins will be held at 11:00 AM on Saturday, December 24, 2011 at The Community Center in Old Agency Village. The Drum Group will be Dakota Nation.

Shelby will be buried next to her father at Big Coulee Cemetery.

The Chilson Funeral Home in Winsted, MN assisted the family with arrangements.