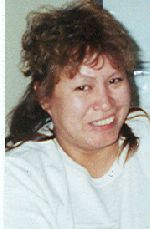 An all night wake was held on Tuesday, September 11th beginning at 7:00 P.M. at the Community Center in Old Agency Village.