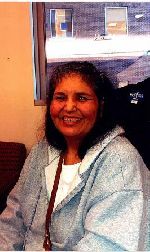 She was born on May 23, 1960 in Minneapolis the daughter of Fenton FastHorse Sr. and Arbutus YellowHammer.

Sharon was formerly employed at The American Indian Center as a Tribal Liaison.

Sharon raised her siblings as well as her own children. She loved being a mother! She had a good sense of humor!

She had many friends, liked to visit, travel, play Bingo, jewelry shopping, going to Pow Wows, taking road trips, loved camping and being in the outdoors. She attended Native American Ceremonies and enjoyed practicing her traditional ways.

Preceded in death by her father: Fenton FastHorse Sr. and by a sister: Corie FastHorse

An all night wake will be held on Tuesday, January 7th beginning at 3:00 P.M. at The American Indian Center, 1530 E. Franklin Avenue, in Minneapolis, Minnesota.

Further services and interment will be in Cannon Ball, North Dakota on Thursday, January 9th, 2014.