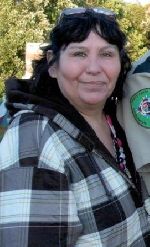 Sharon Marie Jackson, age 47, of St. Paul journeyed to the Spirit World on Tuesday, February 26, 2013 at her residence.
She was born on November 3, 1965 in Detroit Lakes, Minnesota the daughter of Fredrick Jackson and Susan Smith.
Sharon was employed as a bingo hall server, cashier and cook at the JJP, Inc.
Sharon had a College Teaching Degree.
She raised her sons. She also battled cancer long enough to see her first granddaughter born.
Sharon liked to spend time with her granddaughter and family, playing bingo, and going to pow wows. She enjoyed talking on the phone and watching her favorite show CSI Miami.
Sharon was not much of a traveler, instead she enjoyed being with her family. She was the best mom a son could ask for!
Sharon was a strong kind hearted person, who gave everything she could for the benefit of her family. She loved her children and her granddaughter more then anything!.
Survived by her mother: Susan Jackson; sisters: Rebecca Jackson (Duane Warren) and Pauline “Tina” Lyons (Ted); brothers: Milton “Joe” Jackson, Terrance Jackson and Calvin Jackson; sons: Richard Jackson and Duriel “John” Jackson, Shawn Jawson and Dustin Jackson; grand daughter: Isabella Jackson; many other relatives and friends.
Preceeded in death by a sister: Debrah Jackson, dad: Fredrick Jackson and a nephew: Harley Jackson.

Funeral Services for Sharon Jackson will be held at 1:00 P.M. on Saturday, March 2nd at St. Columba’s Episcopal Mission on The White Earth Reservation. Pastor Robert Roy will officiate.
Drum Group will be “The White Earth” Boyz.

An all night wake will be held on Friday, March 1st beginning at 7:00 P.M. at The White Earth Community Center.

Honorary Casket Bearers will be all of Sharon’s sons.
Casket Bearers will be Paul Person Jr., Kenny Jackson, Duane Warren, Lance Mason, Paul Conner and Craig Jackson Jr.
The Chilson Funeral Home in Winsted, Minnesota is serving the family. Online condolences may be made to www.chilsonfuneralhome.com