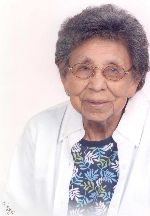 CELEBRATING THE LIFE OF SARAH BIRD

Sarah’s memories of growing up where she lived and went to school. She recalls living near a little town called Ortley, SD and going to school in a one room school house. She and her sister use to walk a mile to the Ortley Day School, going through a pasture where a “mean bull” grazed. She and her sister would run to the farmer’s house where they had a mean dog. It was a time when there were no roads and no cars. These were memories of when she was 8 or 9 years old.

Then she remembers moving to Big Coulee where she went to school at the Big Coulee Day School. She had fond memories of walking through the woods to get to the school.

She eventually ended up at the Wahpeton Indian School (the name back then). Her memories of Wahpeton were from the age of 11 years old. She only went to the 6th grade, but she’s more intelligent than most of us. She reads, writes and understands everything needed for surviving in this world.

Don’t let her small frame fool you! She’s tougher than nails!! She worked in the fields of the farmers nearby when there were only horses. This seemed to be a way of life, being in the fields picking potatoes and harvesting the wheat bundles.

She married Sheldon William Bird on October 9, 1950. Eight children were born of this marriage, Laurel, Sharon, Yvonne, Sandra, Veronica, William, Catherine and Allen. It seems unnatural that three daughters, Yvonne, Sandra and Veronica and one son, Allen Joseph (Joey) have all gone before her time. However, she has had the pleasure raising grandchildren, Sheila Bird, Aaron Bird, and Sheldon Bird (age 12). Sarah, at 83 years old continued to raise her grandson, Sheldon. This is amazing!

Sarah was married 28 years to Sheldon William Bird. It is ironic that he died at the age of 83 on October 9, 1978 (the same day they were married).

Along with working in the farmer’s fields, Sarah actually had a job that she thoroughly enjoyed because of her love for babies and toddlers. She worked at the Day Care for years and even speaks about the babies and toddlers she took care of that are all grown up and have families of their own.

She also worked at the Elderly facilities doing just about everything from cooking to cleaning.
Some of the things she loved to do are playing bingo. For years she was known as the Bingo Queen. She loved to cook and fry bread. She makes the best fry bread in the world. She loved to sew quilts, clothing, and ribbon shirts.

She was committed to her family until her journey ended.

Funeral services for Sarah Bird will be held on Monday, January 25th at 10:00 A.M. at The Community Center in Old Agency Village, South Dakota.