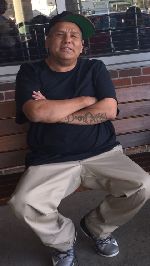 Samuel Bud Ortley Sr., “Anamiaa Jiigish Cade” (He prays by the fire) journeyed to the Spirit World on Monday, December 17, 2018 at Sanford Health in Fargo, North Dakota. He was born on May 12, 1969 in Park Rapids, Minnesota the son of Sam Roberts and Sylvia Ortley.

Samuel went to school in Park Rapids, Minnesota. He worked a lot of different jobs when he was younger, but his passion and expertise was cooking. Sam could make anything, but his fried chicken was the best you ever had. He was employed at Shooting Star Casino in the Whispering Winds Restaurant and The Smoke Restaurant as a cook and in maintenance at the Sports Complex.

Samuel enjoyed many things, cooking, playing horse shoes, cards, listening to music, fishing and going out on the Pontoon. He would take his family out on the lake all day long. He tried Ricing a few times, but didn’t like being in the small canoe. Samuel’s children were his world. He enjoyed spending time with his family. His nieces and nephews loved him very much always having a big hug for them.

Funeral services for Samuel Ortley Sr. will be held on Monday, December 24 at 11:00 AM at the Sports Complex in Naytahwaush, MN.

Officiating will be Pastor Jackie Bernacci

An all-night visitation will be held on Sunday, December 23, 2018 beginning at 7:00 PM at the Sports Complex in Naytahwaush, Minnesota.