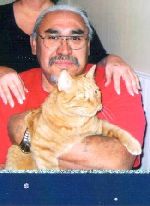 SEE BELOW FOR INFO

Sam was retired from Rock Tenn Graphics in St. Paul.

He enjoyed fishing, hunting and spending time with his family.

Funeral services for Sam Smith will be held at 11:00 A.M. Wednesday, April 10th at The Humanity Center in Red Lake. Mike Eldrige will officiate.

Drum Group will be Johnny Smith

Alternates will be Joe Spears, Mike Stand and Arnold Belgarde.

The Chilson Funeral Home in Winsted, Minnesota are serving the family. Online condolences may be made to www.chilsonfunerlhome.com