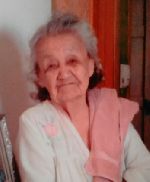 Ruth Marie Walking Bull (Tatankamani) age 91, journeyed to the spirit world on February 18, 2018 at Sandford Hospital in Chamberlain, South Dakota. She was born on January 11, 1927 in Tokio, North Dakota to George Tatankamani and Mabel Keeble. Ruth was raised in Sisseton, South Dakota, attending elementary school at Tekawitha Boarding School in Sisseton and Immaculate Conception in Stephan, South Dakota through the 9th grade.

In her early teens her mother Mabel married Lyman Onihan Sr. and moved from Waubay to Old Fort Thompson, South Dakota, traveling by train. A team of horses picked them up and brought them to Old Fort Thompson. Her step-father, Lyman Onihan, was employed by the BIA school at that time. The family has live in Fort Thompson ever since. After the passing of her husband, Robert Touche, Ruth lived in her home at Fort Thompson for 48 years, raising her children, grandchildren and great-grandchildren. She belonged to a sewing club at the Elderly Center. Ruth loved word searches, puzzles, rummage sales and Goodwill shopping. Ruth also loved to relax at the Casino when she found the time.

A lifelong member of St. Joseph Catholic Church in Fort Thompson, Ruth devoted countless hours of prayer for her family and friends. Those prayers are what got everyone through their trials! She always made sure everyone knew the Lord, Knew how to pray and went to church.

Ruth was a humble, kind-hearted, generous woman, but most of all, she was a very STRONG individual, who had to endure the loss of many family members. She was the strength and pillar of her family and community.

There will be an all-night wake service beginning at 8:00 P.M. on Thursday, February 22nd, 2018 with funeral services on Friday 23rd, at 10:00 A.M. at the St. Joseph Catholic Church in Fort Thompson, South Dakota.

Interment will be at the Lakeview Catholic Cemetery, Fort Thompson, South Dakota.

Arrangements with The Chilson Funeral Home in Winsted, Minnesota