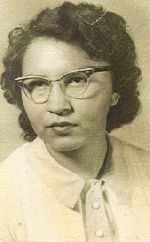 Ruth was born on March 28, 1939 in Sisseton, South Dakota to the late Reverend Willis Titus and Grace White Titus. Ruth was an only child.

Her parents were traveling missionaries and Ruth attended numerous schools and educational facilities throughout the United States and Indian Country, completing her G.E.D. in South Dakota.

After Ruth’s parents settled in the Buffalo Lake area, she lived with her parents who helped raise her five children.

She was a member of The Buffalo Lake Presbyterian Church and its Ladies Aid.

Funeral services for Ruth Titus will be held on Wednesday, May 7th at 2:00 P.M. at The Community Center in Old Agency Village, South Dakota. C.L.P. Filmore Simon, Reverend Enright BigHorn and Gerald Heminger Jr. will officiate.

An all night wakes will be held on Monday, May 5th and Tuesday, May 6th beginning at 7:00 P.M. at The Community Center in Old Agency Village, South Dakota.

Honorary Casket Bearer will be all of Ruth’s friends and relatives.