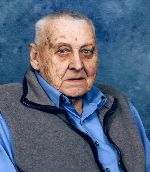 Russell was baptized in Sauk Centre on March 29th, 1925
He was also instructed in the Lutheran Catechism.

He honorably served his Country in the United States Maritime Service for four years from 1943 until 1946.

He was a faithful member of St. John’s Evangelical Lutheran Church in Winsted.

Russ served The Winsted Airport for thirty-five years. A new building at the Airport was dedicated to him.

Through the years, he built four airplanes and his passion was flying them. He was a very accomplished pilot! He also enjoyed fishing at his cabin in Crosslake Mn..

Preceded in death by his wife: Thaline B. Paschke on June 20th, 2010, a grandson: Billy Wemhoff, his parents, infant twin brothers Ronald & Donald, a sister Delores and older brother Martin.

Kay Gueningsman will be the organist for the funeral service.

A visitation will be held on Wednesday, December 12th from 4-8 P.M. at The Chilson Funeral Home in Winsted.

Further visitation will be held on Thursday morning, December 13th at the church one hour prior to services.