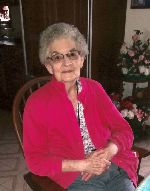 Further visitation will be held on Thursday morning 9:30-10:30 A.M. at the funeral home.

She was born on November 6, 1925 in Winsted Township, McLeod County the daughter of Homer & Mary (Bugnon) Bebo.

A Mass of Christian Burial for Rosella Quast will be held Thursday, November 2nd, 2017 at 11:00 A.M. at Holy Trinity Catholic Church in Winsted. Father Paul Schumacher will be the Celebrant.

Alice Nowak will be the organist for the Mass. Ron Karels will be the Lector. Gift Bearers will be Sue Bebo and John Bebo.

Interment will follow at Holy Trinity Cemetery.
A visitation will be held on Wednesday, November 1st from 4-8 P.M. at The Chilson Funeral Home in Winsted. A Rosary will be recited at 5:00 P.M., Legion Auxiliary Service at 6:00 P.M. and a Prayer Service at 7:30 P.M. Further visitation will be held on Thursday morning, November 2nd from 9:30-10:30 A.M. at the funeral home.

In lieu of flowers, Masses or memorials are preferred.