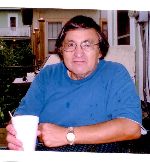 He was born on September 15, 1940 in Red Lake, Minnesota the son of Selam & Eliza Berard Head.

Ronald honorably served his Country in The United States Air Force having been stationed in Italy.

On September 11, 1976, Ronald Head & Constance Deegan were joined in holy marriage in Minneapolis.

He was formerly employed as a Drug Counselor, State of Minnesota employee and was a Postal Carrier for thirty years.

Preceded in death by parents: Selam & Eliza Head, a sister: Roberta McKenzie & by a brother: Robert.

Funeral services for Ronald Head will be held on Friday, July 29th at 10:00 A.M. at The Church of Blessed Kateri (Indian Ministries), 3045 Park Avenue S., Minneapolis.

A visitation starts at 5:00 PM with a ceremony/service at 7:00 PM Thursday evening at the church.

Honorary Casket Bearers will be Matt Rannow, Gerald Spears and all of Ron’s friends and relatives.

The Chilson Funeral Home in Winsted, Minnesota is serving the family. Online condolences may be made to www.chilsonfuneral