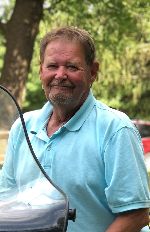 A Celebration of Ronnie’s life will be held on Thursday, August 8, 2019 at 11:00 A.M. at St. John’s Evangelical Lutheran Church in Winsted with Pastor Dave Hormann officiating. A visitation will be held at the church from 9:00-11:00 a.m.
Private interment will be at Nylunda Cemetery- Howard Lake.
Ronnie was born June 5, 1948 in Watertown, MN, the son of DeVern and Merline (Guetzkow) Jorgensen and grew up in Oster. He was baptized at his home. He was confirmed on May 21, 1961 at St. John’s Evangelical Lutheran Church, Winsted, MN by Pastor E.F. Schroeder. His Confirmation memory verse was Daniel 12:3 “Those who are wise will shine like the brightness of the heavens, and those who lead many to righteousness, like the stars for ever and ever”.
He graduated from Watertown High School in 1966.

Ronnie proudly served his country in the Army National Guard for six years. He was also very involved in his community. He served on the Winsted Fire Department for 26 years; was a member of American Legion Post #407 in Winsted and a member of the Winsted Lions Club. He enjoyed helping with the Winsted Summer Festival Fun Run/Walk and was always available to lend a helping hand wherever needed in Winsted.

During his working career, he worked at Millerbernd in Winsted, Poly Foam in Lester Prairie and the Blue Note in Winsted. After retiring, Ron worked part time for Keaveny Drug in Winsted.

Ronnie will be remembered for his outgoing personality and sense of humor. He loved spending time hunting, and checking out where the next fishing hot spot was. Ronnie treasured the time he spent with family and friends and would show up an hour early to any family event.

He was preceded in death by his wife Joyce, his parents DeVern and Merline Jorgensen and by a brother in law, Owen Tonak.

Honorary urn bearers: his godchildren, Leah Mallak, Christopher Jorgensen, and Kyle Heuer.
In lieu of flowers, memorials are preferred to the family.

Chilson Funeral Home in Winsted served the family. Online condolences may be made to www.chilsonfuneralhome.com