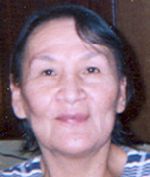 Ramona Belle Ryan was born on February 5, 1952 to Percy and Louella (Bird) Ryan in Sisseton. She was a graduate of Sisseton High School. She loved being with her children and grandchildren and was always there for anyone and everyone. She enjoyed playing whist and was such a good cook, she had many special requests for her fried bread.

She was preceded in death by her parents: Percy and Louella (Bird) Ryan; grandparents: Raymond and Mildred Ryan; brother, Michael Ryan; and uncle, Arnold Ryan.

Funeral Services for Ramona Ryan will be Tuesday, December 18th at 2:00 P.M. at The First Baptist Church in Sisseton. The Reverends Leo Bird and Gerald Heminger, Jr. will officiate.

Interment will be at The Lake Traveres Presbyterian Cemetery in Bryant Township, Roberts County.

Visitation will be Monday, December 17th from 7-9 P.M. at The First Baptist Church in Sisseton.

Billy Kohl will play the organ while Tim White and Eddie Rousseau will provide special music.