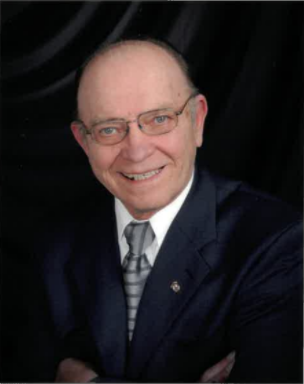 Roger Ernest Thompson passed away peacefully on Friday, November 5, 2021, at the age of 82 at Methodist Hospital in St. Louis Park, MN.

Roger was born November 7, 1938, in Cokato Township, to strong Finnish roots as the son of Ernest and Elvi Thompson.

He graduated from Cokato schools, where he was an avid wrestler.

He married Diana Scheiber on October 17, 1959, at Holy Trinity Catholic Church in Winsted, MN, and in 1960 joined the Air Force to faithfully serve his country for 4 years. Following his military duty, which took them to various posts around the country, Roger and Diana returned to Winsted where they settled down to raise their 8 children.

Roger was employed by Millerbernd Manufacturing where he retired after 31 ½ years. He also loved farming and considered that a big part of his life; he raised dairy cattle, hogs, and ran 80 acres for many years. Above all, Roger enjoyed spending time with his family and looked forward to hearing about their lives and accomplishments. His favorite pastime was playing cribbage, so he happily taught and shared his joy of the game to any family member that had an interest. Many of his grandchildren learned to play and still do, and they can likely recite his guiding motto, “When you lose, say little; when you win, say less.” One of the highlights of the year for Roger was the annual Thompson Cribbage Tournament at Christmas.

Roger was extremely proud of his strong Finnish heritage and enjoyed passing on its traditions and history to his family. He considered his trip to Finland to trace his familial roots with two of his sons one of the best moments of his life, having found several distant relatives with whom he continued to maintain contact throughout his life.