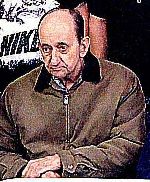 As a young man, he played on Winsted’s town baseball team as a center fielder.

Roger honorably served his Country in The United States Army.

On June 8, 1968, Roger F. Kallenbach and Carol A. Lacina were joined in holy marriage at Holy Trinity Catholic Church in Winsted. God blessed their marriage with three children.

Roger was formerly employed as a supervisor at Chrysler Corporation’s Parts Distribution Center and later at Dura Supreme.

Roger was friendly and enjoyed jokes. He loved his family!

He was a lifelong, faithful member of Holy Trinity Catholic Church in Winsted. He also belonged to The American Legion Post # 407 in Winsted.

A Mass of Christian Burial for Roger Kallenbach will be held on Wednesday, April 4th at 10:30 A.M. at Holy Trinity Catholic Church in Winsted. Father Tony Hesse will be the Celebrant. Interment will follow at Holy Trinity Cemetery with military rites.

A visitation will be held on Tuesday, April 3rd from 4-8 P.M. at The Chilson Funeral Home in Winsted. An American Legion Ritual will be held at 7:00 P.M. and Parish Prayers at 7:30 P.M.

Further visitation will be held on Wednesday morning, April 4th from 9-10 A.M. at the funeral home.