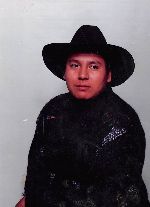 RJ loved to go horseback riding and breaking horses. He also enjoyed fishing and hunting with his family and friends and watching his sons play in baseball and basketball. He loved to make people laugh; he was known for his sense of humor and his big heart. But most of all RJ loved to spend time with his loving wife and their children and grandchildren.

RJ had many talents such as playing the drums, bass guitar and singing gospel at revivals and camp meetings.

RJ attended Solen High School in Solen, North Dakota. In his younger years he worked as a livestock laborer in Gering, Nebraska. In 1990-1992, at the age of 16, RJ was working with a sugar beets factory on Scottsbluff, Nebraska. At 17 he was a foreman and moved to Solen, North Dakota. In 1993 RJ started work as a mechanic at Cenex in Bismarck, North Dakota, later the next year he worked as a heavy equipment operator. He became a prep cook at Bistro in 1996.

In 2001 he met his best friend who later became his wife, Francine Follet-Bissonette. On May 4, 2002 RJ and Francine tied the knot and to this union they had 5 kids together, Abelene (23), Hezekiah (18), Roger III (16), Christian (13) and Sebastian (10). They later moved to Watertown, South Dakota and they lived there for 7 years. RJ started work there, as he called it on Facebook, the “Head Chef”. In 2012 they moved back to Wolf Point, MT.

RJ was the kind of person who could light up someone’s day by the things he said and the jokes he would tell. And no matter what kind of mood you were in, he would have you laughing by the time you were done visiting with him. He was loved by many that knew him and he will be greatly missed by us all.

We love you RJ.

Funeral services will be held on Monday, August 6 at 10:00 AM at the Porcupine Prayer House in Porcupine, SD. Pastor Billy QuJas and Pastor Larry Little Owl Sr. will officiate. Interment at House of Jacob Cemetery in Wolf Creek, SD.

Further all-night wakes will be held on Saturday, August 4th and Sunday, August 5th beginning at 7 PM both nights at the Porcupine Prayer House in Porcupine, SD.

Honorary casket bearers are all his family relatives and friends.